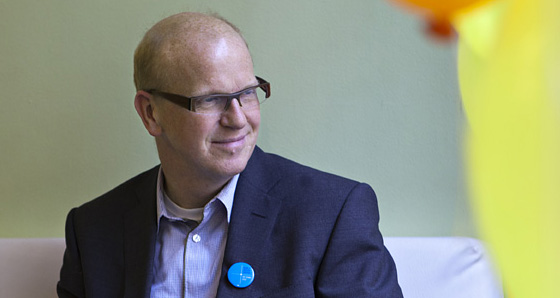 Charles Leadbeater says the social media revolutions in North Africa will have an impact on established democracies, as well. “Much of that will come from outside the government rather than inside”, he says.

We’ve all had the experience: joining the debate in the commentary section for a newspaper article can be depressing. The angry crowd one often meets there quickly wipes away any hopes of a citizen-driven, participatory democracy.

Charles Leadbeater recognizes the problem. He has been a proponent of Gov2.0 – social media-driven democracy – since the publication of his landmark book We-Think in 2008, but admits that not much of the original dreams of web democracy utopians have come true, at least not yet.

He thinks governments usually fail in their attempts to use social media because they “put up a report on the web” in the name of transparency and expect an intelligent conversation to start just by itself. It seldom does.

“What you really got to do is organize and create a community of people who are really interested in this thing, who can shape what the data is and look after it”, Leadbeater says.

Visiting in Helsinki, there’s a realistic, if not pessimistic tone to his message. Leadbeater is a thought leader who devised Bridget Jones’ Diary with Helen Fielding for The Independent in the 1990’s, coined the term Pro-Am already in 2004, and then moved forward to author We-Think. He is a former advisor to Tony Blair. His latest essay, Cloud culture, is, at times, a dystopia where service providers like Google and Facebook have become a potential threat to our private lives.

Has openness and social media run out of steam in the service of democracy?

“Open alone is not enough, you need to think why you are open, what you are open for”, he says.

Open must have a reason

Perhaps open has just grown up. Leadbeater recalls Helsinki being the first city where, over a decade ago, he actually saw people text messaging. Since then, mobile devices have come of age, the Internet has gone mobile and social. Helsinki is perhaps not the pinnacle of mobile social development anymore, but in his keynote speech, he entertains his crowd by saying Finland remains “modern and collective” – whatever that means. Coming from the 1980’s contributor of the late Marxism Today, it must be a compliment.

Sitting in the lobby on lunch break during a Forum Virium Helsinki’s seminar, he promotes the openness brought about by the web, but admits that he remains ambiguous as to whether or not social media is a blessing for democracies.

“Broadly speaking, it is good for democracy, because it gives more people a voice and an opportunity to organize they didn’t have before and in ways powerful people can’t control. That’s real. If we were living in any kind of an authoritarian regime, the web would be a really important political space”, Leadbeater says.

But there is an irony in something that no one foresaw a decade ago: social media and openness is indeed reforming societies and democratizing nations – but this takes place in North Africa. Leadbeater argues that this new political culture will not be confined to just Africa, but will affect our developed democracies, as well. But how exactly that will happen remains largely to be seen. Established democracies are entrenched in their old ways of doing things, and few feel an urgency to change.

“People have argued that the web should be able to breathe new life into exhausted representative democracies. That, I think, has proven much more difficult.”

From government 2.0 to communities 2.0

How, then, should we approach the issue of interactive technology, openness and open data in developed democracies? Despite the problems, Leadbeater thinks, “we’re just in the beginning”. The trick is that perhaps we shouldn’t be thinking so much about government 2.0, but about communities 2.0.

“Governments can do various things, but we shouldn’t expect that governments setting up web sites gets it all done. Citizens are better able to solve the challenges they have and meet the needs that they have. Much of that will come from outside the government rather than inside”, he says.

So basically it’s the same story as in Egypt and Tunisia. People there used web-based tools to organize and act. Communities here are using the same tools, and they will start holding governments accountable with these tools.

Communities matter with open data projects, too. Leadbeater thinks governments can take them only so far. Communities and civic entrepreneurs actually do things with the data and can pull things together.

“Just making the data open is not enough. You need capable, interested communities, who can start using the data in ways that either allows holding systems to account or allows them to create alternatives. You need to empower people who want to use data to solve big problems.”

One good example of a citizen-driven service is Patient opinion, an independent feedback site for the National Health Service in the UK. The revelation is that the service is not for “everyone”, but only for those who care for the NHS and want to give thoughtful, narrative feedback. Letters are read, published if appropriate, and so far, in 102 cases, changes have taken place on the basis of the feedback letters.

Leadbeater says that these kinds of sites can target a really small number of people, but what they contribute “is intelligent and thoughtful”. This is how they avoid the angry mobs dominating commentary sections in newspapers or government feedback sites.

The same kind of selective community approach could be applied to democratic processes, as well. Government reports could be prepared with a community of interested people who care about the result. The method is very different from the current system, where finished reports are posted on web sites for feedback.

Leadbeater is well aware of the argument that this could lead into the formation of a new elite influencing issues through social media and leaving the analogue majority out in the cold. But nonetheless, he seems to think the idea is worth trying.

“I don’t think we know a lot about that. There might be a whole set of ways that have to do with survey-based ways (of consulting people). The IT company Infosys does forward planning with 45,000 employees. There might be different ways of exchanging ideas that are more voting-based and consultative”, he says.

This would mean a radical change and the beginning of a much more collaborative form of government than the one we have now.

But as long as that change does not happen, Leadbeater remains pessimistic of a Gov2.0-revolution starting from the higher echelons of society — the ministries, civil servants and political elite. Asked what Finnish civil servants should do with Facebook and Twitter and blogs, he gets a bit cynical.

“You probably shouldn’t do too much with them anyway. When governments have used those tools, they tend to use them rather tokenistically. They do what they used to do, but using Twitter or Facebook, but they don’t engage or collaborate”, Leadbeater says.

Charles Leadbeater was the keynote speaker at Forum Virium Helsinki’s 5-year Anniversary Seminar on Friday, April 8th, 2011. His session approached the theme of Gov2.0 by asking, ”What’s so good about Open?”