The six largest cities in Finland have joined forces to tackle their common urban challenges.

The Six City Strategy  (6Aika) is implemented with cooperative projects which enable the cities to experiment in a larger context than just one city. They engage the  whole urban community to create smarter and more viable cities.

Finland’s six largest cities – Helsinki, Espoo, Tampere, Vantaa, Oulu and Turku – are home to some 30% of the population. As a result, their joint development projects are of national importance.

Based on solution-oriented thematic collaboration rather than geographical region, this unique initiative boosts city co-operation to go beyond rhetoric.

The aim is to create new business, know-how and jobs in Finland. 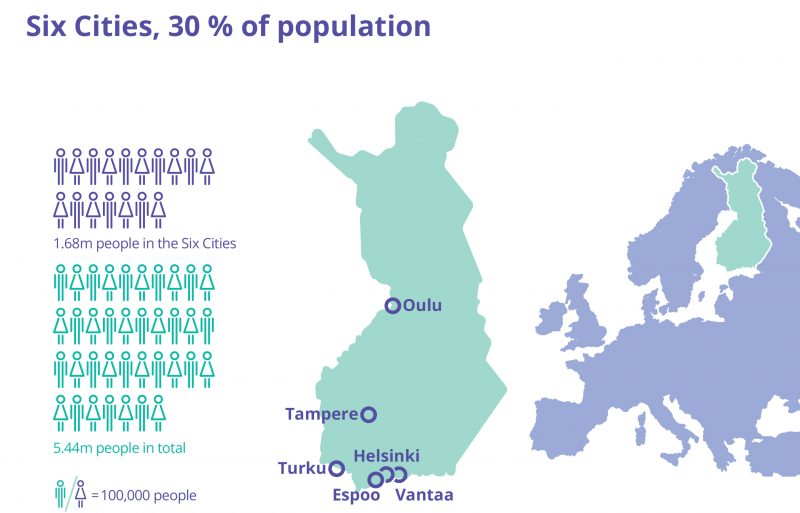 “As the cities face many common challenges, they can best be tackled together” – Jose Valanta, City of Vantaa

If a company develops a digital service used by the residents of only one city, it is still small business. If the same service is replicated to the six largest cities in Finland, it becomes a success.

With shared projects, platforms, co-creation models, standards and open data, the aim is to go towards interoperability and shared services.

All the collaborative projects of the strategy involve at least two operators from the areas of the six cities.

The Six City Strategy has three focus areas: open innovation platforms, open data and interfaces, and open participation and customership. The three-year spearhead projects link to each of these focus areas and involve all the six cities.

Making our data your business

Opening up public data has the potential to offer fuel for companies to make money with new apps and services. The six cities are committed not only to opening up their data but also to encouraging its commercial use.

The cities are harmonizing the ways their data is opened and released. Several joint recommendations have been published to steer this work.

There has also been significant efforts to harmonize the open APIs releasing the data. The vision is to help companies scale up their business to all six cities at once.

The six cities have also pushed forward a network of pilot environments, which include both physical spaces and virtual ones.

These innovation communities/platforms are test-beds for companies, academia and other actors to run their research, product development and innovation in real-life settings.

The Open Innovation Platforms Handbook defines the concept of ‘innovation platform’ and the role of platforms as a tool of urban development.

In order to keep the public service offering competitive, it’s vital for cities to develop and innovate new services in co-operation with the customers. In the city context, this means not only private people but also companies.

With a customer and end-user approach, cities gain hands-on knowledge on how to improve their customer service and processes. Companies are able spot potential business opportunities along the way.

By 2016, the six cities have already launched up to 26 co-operation projects, pilots and agile experiments, with a budget of 45 million euros.

Robot buses are on trial in Helsinki, Espoo and Tampere. This unique experiment aims to solve the challenges of urban mobility. For companies, the robot buses offer a platform to develop and test their solutions in practice. The aim is to set Finland to the development fast lane of automated road transport systems and to create new export businesses.

The Climate Streets in Helsinki and Vantaa aim to create the city of the future that is low carbon and adapted to climate change. Iso Roobertinkatu, Tikkuraitti and Asematie are already built areas to test and search for new solutions. Three agile pilots run to develop on sustainable solutions and resource-wise use of energy.

Tampere, Helsinki, Oulu and Turku create open real-time interfaces to their data systems related to transport and traffic. The interfaces are related to road and street maintenance, public transport, traffic management and parking. Intelligent transport is expected to have a very significant market potential in the future. The project will activate companies to utilize the open interfaces in their business.

The Six City Strategy runs between 2014 and 2020 with the aim of creating new know-how, business and jobs in Finland. It is part of Finland’s structural fund programme for sustainable growth and jobs 2014–2020. It is funded by European Regional Development Fund, European Social Fund, the Finnish Government and the participating cities.

The six largest cities in Finland have joined forces to tackle their common urban challenges. The Six City Strategy  (6Aika) is implemented with cooperative projects which enable the cities to experiment in a larger context than just one city. They engage the  whole urban community to create smarter and more viable cities. The Six City Strategy is part of Finland’s structural fund programme for sustainable growth and jobs 2014–2020.