The SELECT for Cities project sought a shared Internet of Everything (IoE) platform through public pre-commercial procurement.

The aim was to find out whether cities could find better solutions available on the market by combining their efforts in the field of IoT procurement. The project was a major IoT procurement that can help promote the utilisation of IoT in cities.

The role of Forum Virium Helsinki

The project was coordinated by Forum Virium Helsinki, which was also responsible for cooperation between the cities and the running of the Helsinki living lab. Helsinki’s local living lab was the Jätkäsaari area, where residents were recruited to test the project’s solutions and to measure air quality from their balconies using sensors built by Forum Virium.

Key achievements of the project

The companies that participated in the final phase of the SELECT for Cities innovation challenge and their IoE platform solutions ranked as follows in the competition (see below). The platforms in question can be comprehensively utilised by anyone. All three platforms have so-called community versions, which are free of charge. Some of the platforms also offer additional services for a fee, such as platform maintenance and various other support services. For more information on the platform solutions, please click on the links.

In the final phase of the innovation challenge, the solutions of the three operators that reached the final were tested in Helsinki and Antwerp. The validation phase included local piloting, in which software developers, city experts and residents got to test these innovative prototypes and the applications thereof at home and in organised hackathons and workshops. A wide range of valuable feedback was collected from the testers, which was utilised in the further development of the solutions.

The project sought an IoE platform that would collect all the data and sensor measurements generated in a city into a single platform for convenient utilisation. In Helsinki use-case, air quality, partially collected with IoT devices and also from Helsinki open-data, was measured and data was visualized over the map in IoE platforms. To this end, open-air quality data generated by the City and air quality measurements conducted by the residents of Jätkäsaari were imported to the platforms and utilised in the testing thereof.

Forum Virium wanted Jätkäsaari to serve as the testing area as the district has been a topic of active public discussion for a long time due to its busy port and motor traffic and construction sites. As such, both the area’s residents and the City have an interest in gaining more information on the area’s air quality. Forum Virium wanted to utilise not only the City’s own measuring stations, but also local air quality measurements conducted by residents – having resident participate was an important part of the project.

An IoE platform is an interesting method for utilising data collected in Helsinki and producing services for residents that make their everyday lives easier, for example. For Helsinki, the SELECT for Cities project was a major opportunity to further strengthen the city’s position as a pioneer in the utilisation of open data. The project also facilitated the realisation of the strategic objectives of the City’s ICT programme, particularly in regard to open APIs and open source software. The large-scale IoT procurement carried out in the SELECT for Cities project can facilitate the utilisation of IoT in cities.

From the perspective of city administration, the project provided valuable lessons about the application of PCP (pre-commercial procurement), as part of the Helsinki city strategy. By defining specifications jointly with the participating cities at an early stage, the final products were achieved and could also be tested in a real environment. Forum Virium Helsinki was successful in serving as a PCP operator in the project and received plenty of positive feedback from the EU as an innovative developer and effective promoter of PCP operations in the final assessment. The work also continues in the AI4Cities and FABULOS projects, in completely new industries.

The Internet of Everything (IoE) is recognised as one of the dominant ways transforming the way we manage and live in our urban environments in the future. The extension of the intangible world of the Internet to physical spaces and objects is a massive opportunity for new services and business in areas such as logistics, transport, the environment, security and wellbeing.

The Internet of Everything is directly linked to the smart city development of the future, but it has proceeded slower than expected. The primary obstacles have been the lack of common standards, the fragmentation of the marketplace, and lack of ways to systematically test and introduce new solutions in cities. 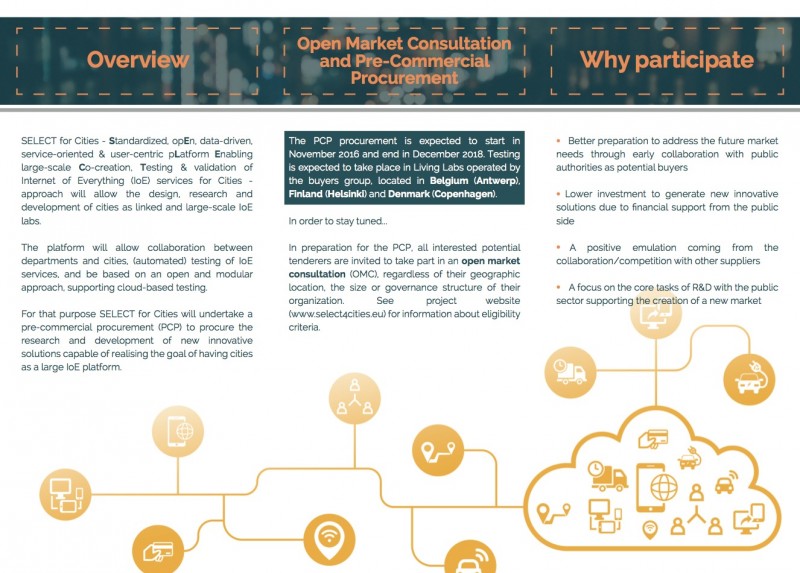