Frontpage Current Projects
About
Contact information
FI / ENG
Helsinki City Council decided to make the Kalasatama district a model for smart city development. Kalasatama shows what the future of a witty city looks like.
Veera Mustonen, heading Smart Kalasatama programme, is looking out to the building site through the panoramic windows of Restaurant Vanha Kalasatama. The old dockworkers’ canteen on the top floor has a splendid view over the new city district. So far a few city blocks have been completed, with homes for a couple of thousand people. In just a few years the view will be very different: a bridge connecting the district to downtown Helsinki, 33-floor tower blocks and the population of a small Finnish town.
The new Kalasatama is a Finnish example of a Smart City, an urban environment where both people and the environment thrive. New technology and data are helping to create new sustainable services for the citizens. In the city’s strategy programme Kalasatama has been named the model district for smart city development in Helsinki.
“Now we need to put this theory into practice,” Veera Mustonen says.
This is exactly the goal that Forum Virium Helsinki, the workhorse of the project, has set to achieve together with residents, companies and municipal leadership.
“Besides intelligent infrastructure we need the creativity of residents and companies. We organize events, and challenges to invite different stakeholders and citizens to use Kalasatama   to develop their own innovations.” 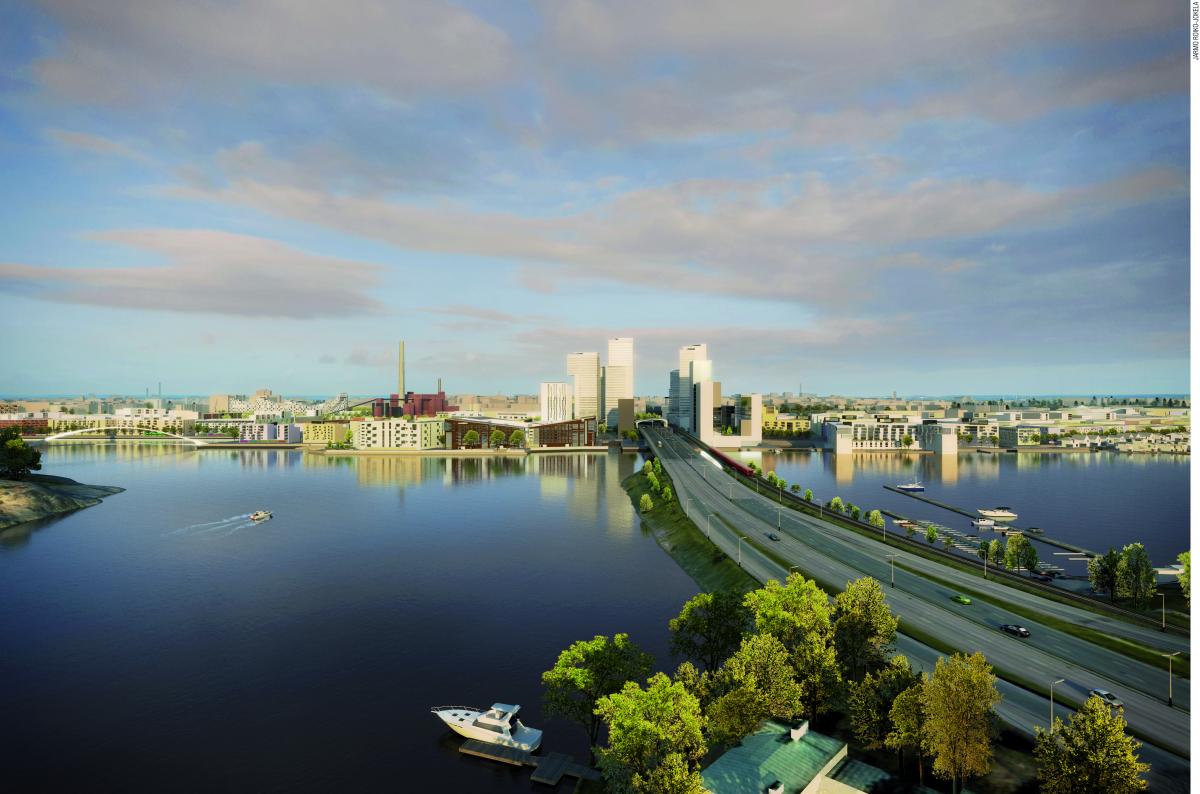 The City drives innovation to Kalasatama
At the Smart Kalasatama seminar the development agents of different city departments together with enterprises are visioning new solutions to be tested in Kalasatama.  Architect Salla Hoppu, from the City Planning Department, is presenting the thoughts of the group focused on residents’ energy use. The group has envisioned how a fictive resident, 41-year-old Nina, could live as energy efficiently as possible in Kalasatama.
“Her roof, walls and windows produce solar energy. She will the energy to take her children to day care on an electric cargo bike,” Hoppu envisions.
Similar workshops are held with current and future residents. For example the new social services and health care centre, which will be built next to the Kalasatama metro station, is planned together with its future users.
“Gaining insights of the customers is a good way to get ahead in planning. We are mapping residents’ needs in focus group interviews,” Veera Mustonen says.
When the goals have been set, it’s time to experiment. The Smart Kalasatama programme is focusing on creating intelligent city services. Smart residents are coming up with innovative services, which make clever use of open data sources and the possibilities of new technology.
“The area is being developed through experimentation,” Mustonen explains. 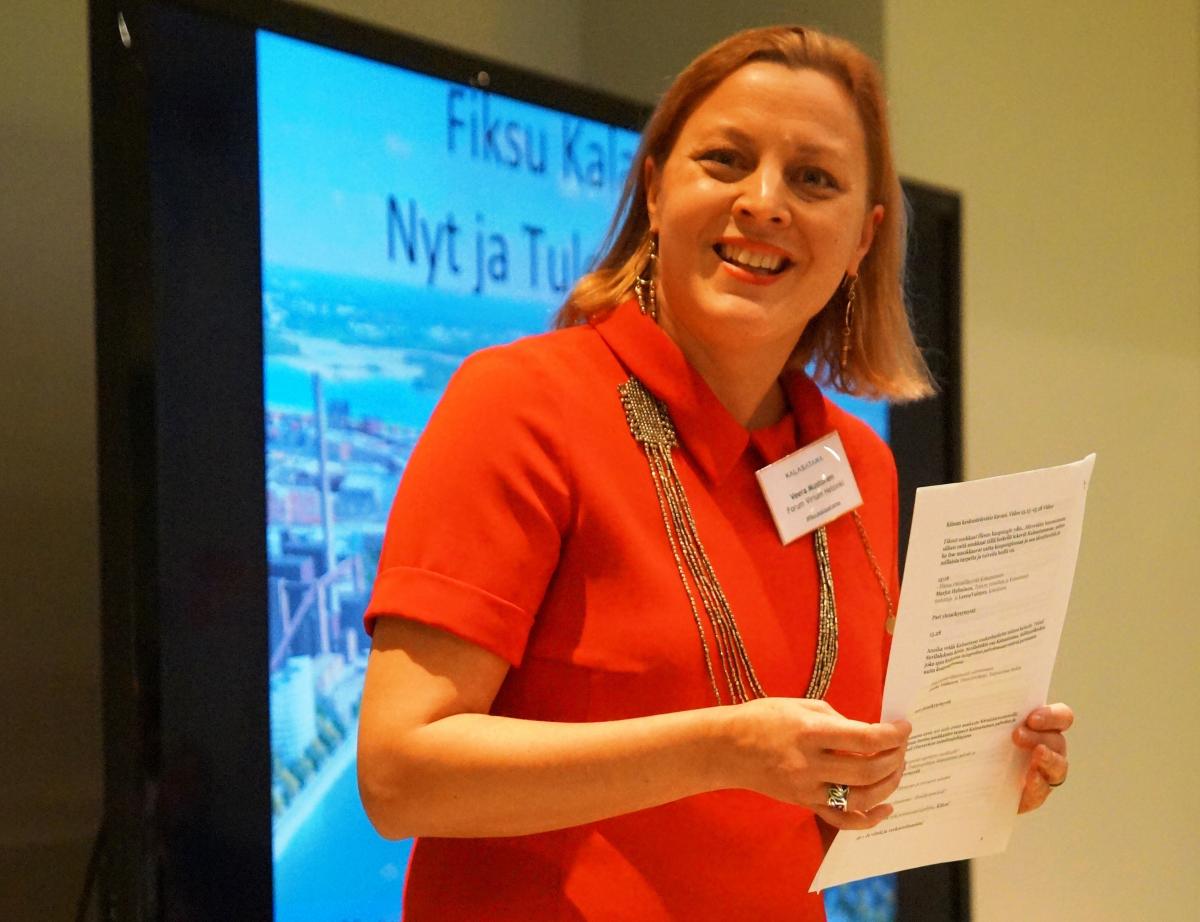 Veera Mustonen
Licence to test
Yesterday’s docklands area and today’s building site is providing an ideal setting for many temporary ventures. “You can really test out everything here, the city is very flexible,” Mustonen promises.
One of the experiments was the smart containers put together by PiggyBaggy, a start-up for crowdsourced logistics. They worked together with SRV, the City library, Helsinki Metropolitan Area Reuse Centre, Forum Virium Helsinki and the residents’ local organic food co-op to build a temporary local service center.
“The Kalasatama residents were very active in using the 24/7 self-service library and gave very positive and valuable feedback of how to continue the experiment,“ managing Director Harri Paloheimo from PiggyBaggy says.
Companies, officials and future residents are bursting with ideas for developing the city.
“Kalasatama will become our pilot district. Together with Aalto University, we are introducing the intelligent PiggyBox delivery container for packages to be picked up and dropped off for delivery. We are also looking for a partner who’d like to test an environmentally sound way to organize home delivery to customers,” Managing Director Harri Paloheimo from PiggyBaggy says.
The biggest surprise for Paloheimo was the speedy decision-making process of the City. Though often criticized for their slow response, city officials gave the land leasing decision in just two weeks. The pilot use of the container-shaped delivery point started as soon as power lines were up.
“PiggyBaggy is a great example of a new type of city service, which reduces traffic, makes use of new technology and involves residents in development in order to discover the genuine needs for the service,” Veera Mustonen marvels.
Successful business is also permitted in the Kalasatama experiments. “It’s absolutely necessary, in fact. The business cases need to have potential to flourish beyond the initial experiment.”
This is also a prerequisite set by TEKES, the Finnish Funding Agency for Innovation, which chose Kalasatama as the first pilot district for its Witty City Programme. Business tested in Kalasatama has to be viable for other cities, too.
Testing new ways of working is easy when building a new district. For example the new online service for Kalasatama residents, fisuverkko.fi (“Fishnet”) has a good chance for taking off. Every household is linked to it. Services like apartment maintenance history, a fault reporting channel and an online flea market are handy for all residents.
“Launching such a service in an old district would be difficult. Here we have a chance to make it a new service to every resident.”
The city is also using Kalasatama as a test district. Helsingin Energia, a local energy company, is testing a smart grid and smart metering in the area, while the future comprehensive school of Kalasatama is experimenting with new pedagogical models supported by learning technologies. Instead of traditional classrooms the school will have two large spaces, which can be flexibly divided for different kinds of teaching scenarios.
The Finnish version of a smart city is already attracting attention. Mustonen has just said goodbye to a busload of foreign guests after their tour of the smart Kalasatama.
“We have seen a passionate response to the new district. Companies, officials and future residents are bursting with ideas about how to develop the city. I hope we can translate all this enthusiasm into concrete actions to develop a better city.” 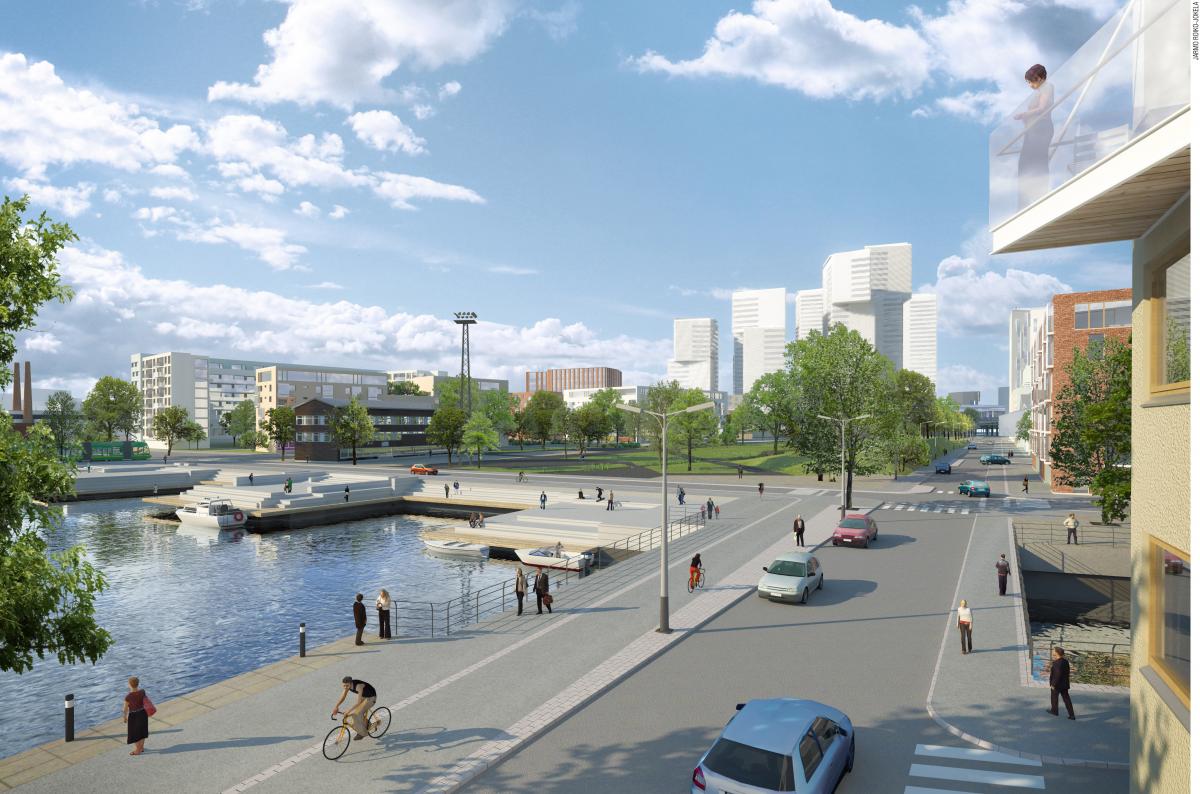 SMART KALASATAMA
The new Kalasatama district will be built as the “Smart City” of Helsinki. It will be a worldwide model district for testing and developing new urban services for residents.
Why it’s done
Smart Kalasatama is exploring new ways to build a sustainable city and develop services that improve residents’ quality of life. The vision of Smart Kalasatama is to be so smart that it saves one one hour of each resident’s time every day. In the future the solutions following this vision can be launched Helsinki-wide as well as become successful exports for companies.
Who’s involved
City of Helsinki Economic and Planning Centre, Forum Virium Helsinki and TEKES, the Finnish Funding Agency for Innovation. Dozens of large and small companies are participating in the development of Smart Kalasatama together with research groups and citizens.
Who it serves
All citizens, the participating companies, city administration.
Duration
Project planning 2013-2014.
Programme 2015–
http://fiksukalasatama.fi/in-english
Smart Kalastama project page (Forum Virium Helsinki)
Kalasatama web-site
Smart city life
Head of Smart Kalasatama Programme Veera Mustonen would like to see the following five ideas from residents become reality in Kalasatama by 2020.
Restaurant Day every day
People looking for new acquaintances could invite people to dine with them.
Shared (electric) vehicles
Pick up an electric car, e-bike or electrically assisted walker or a normal bike from the metro station. After you’ve parked it, it’s free for the next user.
A solar panel cooperative
Residents can buy shares in the production capacity of solar panels. The panels on rooftops or balconies are easy to connect to the intelligent grid. Residents can either use the electricity themselves or sell it to their neighbours.
Flexible space service
Companies and residents can advertise any space for rent, from the common room of their housing company to their own living room, the school sports hall or a car repair workshop. Free spaces can be easily rented by the hour, day or month, for example as a home office.
Boat share and ride
Many leisure boats stand parked at the harbour for most of the summer. When these boats are shared and used for group island trips or fishing excursions, maintenance costs can be divided and more people get to enjoy maritime Helsinki.
Text: Petja Partanen, Tarinatakomo
Pictures: Jarmo Roiko-Jokela, City of Helsinki; Pekka Salmi
Share the article Facebook Twitter LinkedIn