Frontpage Current Projects
About
Contact information
FI / ENG
The CitySDK project develops and harmonizes open application programming interfaces (APIs), which are utilized by digital city services around Europe. Helsinki’s issue reporting API has become an export.
The wet winter has eaten gaping holes into Helsinki streets. Now such problems are easier than ever to report. Metro Fiksaa (‘Metro fix it”) web service of the city newspaper Metro allows anyone to report issues and problems in the city.
A sewer lid has come loose. There are potholes in the tarmac or macadam on the bikeline. A car is parked on a zebra crossing. Most issue reports are already marked green on the map to signify that they have been fixed. Only the missing speed limit sign in the Oulunkylä district is still blazing red, awaiting action.
Thanks to the open API built in the CitySDK project, any proficient coder can now build a similar web service. Mobile and web applications send a specified feedback message to the city’s open programming interface. The interface, meanwhile, relays the messages directly into a city database.
“Residents contact the City of Helsinki Public Works Department 120 000 times per year. The open issue reporting API not only provides new opportunities for the developers of city services, but also makes officials’ lives easier,” says City of Helsinki project planner Jaakko Rajaniemi.
A message about a gaping sewer lid or a fallen traffic sign gets to the right place quicker via the internet than by telephone call. 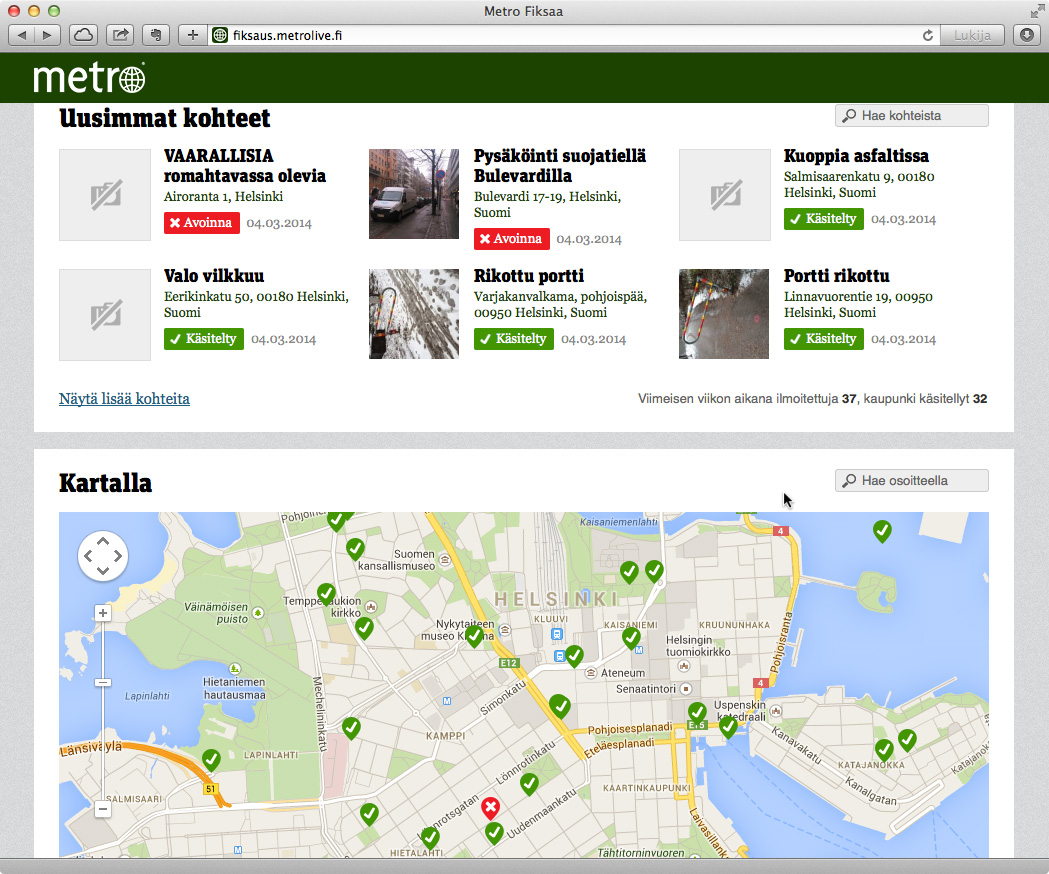 Efficient feedback management
Tarja Posti, responsible for the Public Works Department’s customer service, is happy. Managing feedback via the interface is easier than via telephone or email.
“For issue reports, for example, we get the location information sent straight to our operations management system,” Posti says.
The system also reduces duplicate issue reports. The information about a fix in progress is relayed back to the Metro website via the interface. Anyone can keep an eye on whether a issue has already been fixed.
The person who has made the issue report doesn’t need to know which city department is responsible for fixing it either. When a resident who’d had enough of a traffic light not working sent a issue report via the Metro newspaper’s web service, things were quick to happen. In the next hour, the Public Works Department customer services informed that the report had been passed on to the right person. The query was answered just moments later. The yellow flashing light was on, because the programming of a new traffic light machine was being tested.
“The lights will work the moment that the programming is completed, which will be very soon,” the traffic technician from the Traffic Control Centre answered.
The CitySDK project builds open interfaces, which are interoperable across city and country borders. First a pilot project was conducted in one city, after which the experiences and lessons learned were utilized elsewhere.
Helsinki’s feedback interface was launched in the summer of 2013 and soon after it was also introduced in cities like Amsterdam and Barcelona. Helsinki, meanwhile, has already launched a new tourism interface, which was originally developed to serve Lisbon’s needs.
There can be excellent business opportunities for application developers, too, if the same apps work around Europe. “Make an app for Helsinki, use it in Amsterdam,” project manager Jaakko Rajaniemi explains the basic idea.
This model has already been proven to work. For example the Spot in Helsinki mobile app, which took part in the Apps4Finland competition and won the City of Helsinki tourism challenge, also helps out tourists in Lisbon under the name Spot it Lisbon. 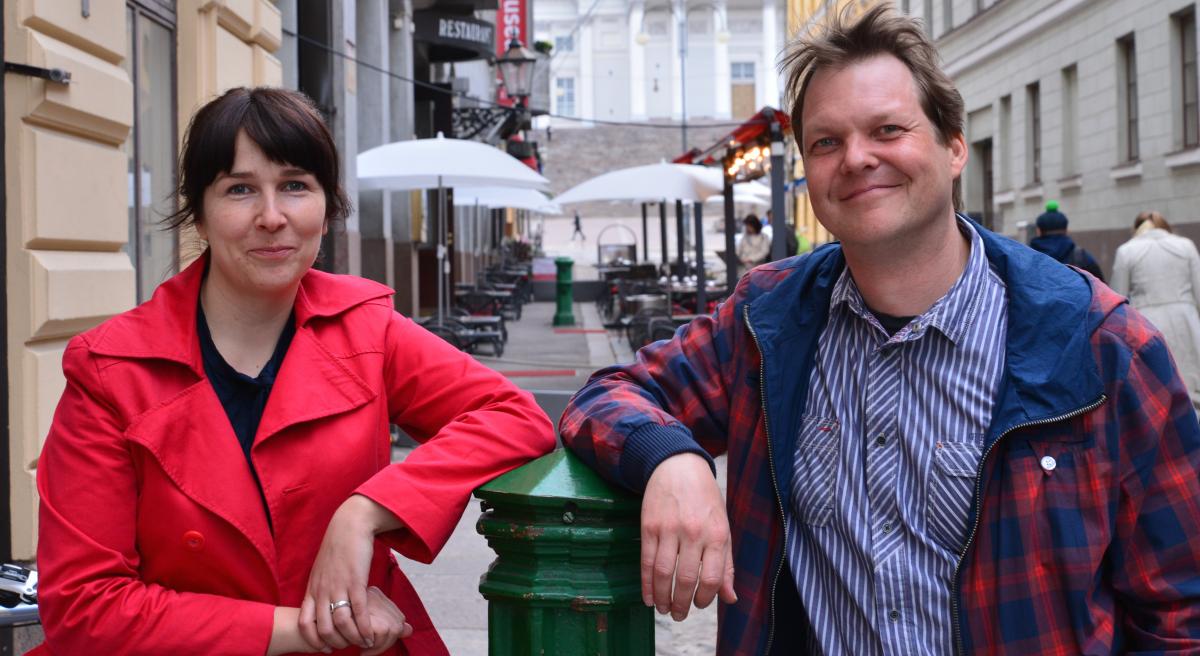 Hanna Niemi-Hugaerts from Forum Virium Helsinki and Jaakko Rajaniemi from City of Helsinki Information Technology and Communications Division are working to make Helsinki a paradise for software developers.
The eyes and ears of the city
Heli Rantanen, the project manager responsible for Helsinki’s feedback interface, says that the open API gives external app developers the chance to utilize information produced by the city. This allows them to build services the city’s IT department wouldn’t imagine possible.
“We have seen how innovatively open interfaces are used. It’s not necessary for all the apps to be built by the city,” Rantanen states.
There are high hopes that the new open feedback channel will also make city maintenance more efficient. When it’s easy to send feedback, the maintenance staff will find out about issues earlier.
“Residents are the eyes and ears of a city. The Public Works Department won’t know there’s a fallen traffic sign if nobody tells them about it,” says Pekka Sauri, the Deputy Mayor in charge of public works.
After the completion of the CitySDK project, a new network will be established to continue the harmonizing efforts.
“Collaboration between cities started off well in the EU project. Next, we will include more cities and extend the harmonizing to new interfaces,” development director Pekka Koponen declares.
Helsinki region becomes developer heaven
Open data sets only become assets when they are put to good use. Since 2012, the City of Helsinki has organised regular developer meetings for exploiting HRI data sets and open interfaces as well as to provide practical support for coding.
There have been up to three workshops every month. The attendees focus on a wide range of issues, from new ways that residents could use their pocket-sized Helsinki travel cards to how the city’s open data interfaces could best serve all residents.
The city’s collaboration with application developers is also supported by the city’s developer website dev.hel.fi. Besides showcasing the data interfaces already opened by the city, it also allows the app development community to participate in specifying and testing the open data interfaces.
”The website also has information about upcoming developer meetings and competitions aimed at developers,” Jaakko Rajaniemi from City of Helsinki Information Technology and Communications division says.
The website was founded by the City of Helsinki Information Technology and Communications division and Forum Virium Helsinki. The logo says it all: Helsinki Loves Developers.
“Through the collaboration of different stakeholders, Helsinki can become the world’s most developer friendly urban community,” Hanna Niemi-Hugaerts from Forum Virium Helsinki envisions.