Consulting firm Frost & Sullivan has surveyed European real-time cities in their utilization of open data, use of open source and publishing of datasets. The online survey was taken by 27 cities. Helsinki leads in almost every sector of the survey. The survey results were presented in a Tekes webinar on 11 June 2015. The City of Helsinki was praised in the survey for its extensive activities with data-based services, open source utilization and collaboration with various actors.

The focus of the survey was on Western Europe and the type of actions cities have taken to publish their datasets. The survey explored the questions how cities collaborate, what their goals are, and how the publishing of data can generate business growth.

The survey defines real-time cities as urban concentrations of more than 250,000 residents that publish data, utilize open data and use open source to develop services and to generate innovations. A Heat Map compiled from the survey results illustrates with colours that Helsinki leads in almost every sector. According to the survey, Helsinki only lags behind other cities in the collection and use of real-time data.

The survey assessed the progress of cities on eight factors. These included the number of datasets published, collaboration with partners, commercial sources and end-use, and use of open source. According to the Heat Map, some cities are only in the first stages in publishing datasets and use of open source, while others are more advanced. 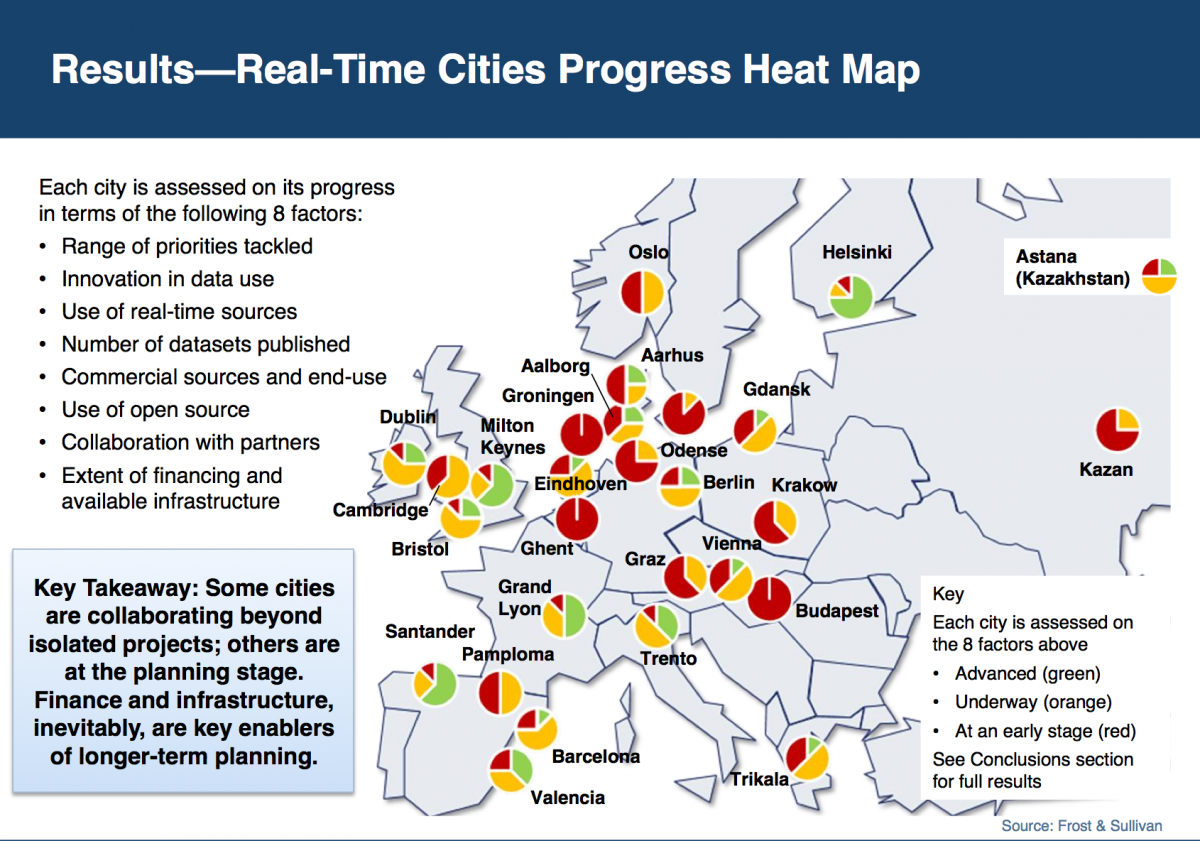 The survey puts Helsinki in uncontested first place in the number of datasets published, and the other cities surveyed still lag far behind. However, the survey shows that all cities including Helsinki face challenges in commercialization – they have not generated much new business activity from the open datasets. Helsinki has tackled this challenge in an open data spearhead project included in the 6Aika six-cities strategy. The project focuses on accelerating the generation of data-based new business.
The survey estimates that the quality of data will outweigh the quantity of data in the future, so cities should focus their efforts accordingly. The survey emphasizes the importance of further utilization and scaling down of data; Helsinki excels in these areas.

Services and innovations from open data

The survey shows that cities want published datasets to produce tangible benefits for citizens. As a result, cities address such policy objectives as transport and traffic, energy efficiency and the accessibility of public data. By publishing datasets, cities above all strive to improve services and the quality of life of their citizens. However, open data is still little used in city planning and decision-making.
According to the survey, cities have emphasized the accessibility of open data. However, although publishing of real-time data is of interest to everybody, the related technical challenges are overwhelming to many cities. Cities are also concerned about questions related to the ownership of data, sharing of data and privacy.

Read more about Forum Virium Helsinki and how we build a better, smarter and more open city: