The Finnish Centre for Open Systems and Solutions COSS has awarded the City of Helsinki with the Open World Hero 2015 prize. The prize was presented to the City of Helsinki on 22 September at Mindtrek Openmind 2015, an international forum for open source, open data and open content, held in Tampere, Finland.

According to COSS, the City of Helsinki has been systematically building an open city and offers a good example for other Finnish cities and municipalities. The City of Helsinki has promoted open data with its activities and opened the City decision making with the Ahjo service [which gives access to City records and makes them available as open data]. The City also cooperates with citizens and the entire ecosystem through open interfaces and community-minded initiatives.

The most recent example of the City of Helsinki’s role as a source of inspiration is the City of Helsinki Information Technology Programme, which applies open source, opens City procurements and promotes an open ICT ecosystem. The City of Helsinki leads the way in Finland and is a pioneer globally. The current prize is a recognition of the work done and encourages future achievements.

The Open World Hero trophy is conferred to an individual or organization that has promoted and advances openness, to be held by the winner until passed on to the next winner. The trophy is a mosaic artwork titled In the Nucleus by Finnish artist Virginie Loÿ. The trophy is now conferred for the third time. The previous winners are the Dreamschool in Kauniainen, Finland, and the Finnish open source guru Michael “Monty” Widenius. 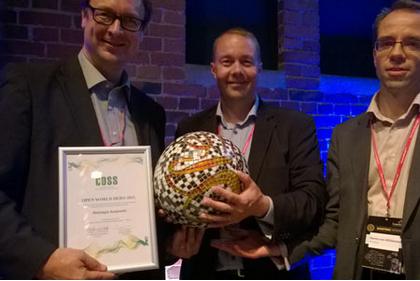