Sohjoa Baltic generated information about the opportunities afforded by automated public transport. Studies and pilots help urban planners, decision-makers and city residents to prepare for the changes introduced by the digitalisation of transport.

The aim of the project was to test how well the automated public transport’s vehicle technology would work in a normal urban setting and what sort of issues might be highlighted in terms of legislation or some other aspect linked to the operating environment. The aim was to assess the level of services that can currently be provided and the opportunities that this technology will be able to offer in the future. The experiments aim to promote better public transport services and ease the transition to environmentally friendly public transport.

The purpose of the experiments carried out in real-life environments was to identify the challenges that the new service might pose in a built urban setting and the public’s views regarding the traffic arrangements required for the experiments. In addition to this, the project studied passengers’ opinions about the new service. The written study aimed to provide a comprehensive description of the current situation, promote the utilisation of the information gained through the experiments, and pass on the information for the stakeholders to use.

The project’s main sponsor was Interreg Baltic Sea Region. The total budget was €3.7 million, of which Forum Virium’s portion was €312,000. The project ran from 1 October 2017 to 30 September 2020. Forum Virium served as the leader of the research stage work package (WP2), while the coordinator for the entire project was Metropolia University of Applied Sciences.

Key achievements of the project

The project successfully tested driverless minibuses in the following locations: Kongsberg, Helsinki, Tallinn, Gdansk, Jelgava and Aizkraukle. The tests provided practical information about the best way of implementing a transport service that uses this new technology. The tests will also help any future pilot locations, city developers and service providers to anticipate the prerequisites and hindrances they must prepare for when introducing a new transport mode such as this to an urban setting.

All the practical knowledge gained has been published in a series of five publications. These publications contain practical guidelines for acquiring autonomous public transport and specifying its requirements, in addition to which they compare the legislation of the Baltic Sea states and Europe, shed light on potential roadblocks to these services becoming more widely adopted and propose a roadmap for removing the blocks. Furthermore, the publications propose suitable locations where the technology should first be implemented and discuss the social, financial and other similar effects that the tests had on the pilot locations. A few other scientific publications have also utilised the project’s findings.

A survey was carried out amongst the pilot passengers at four locations, resulting in a total of 837 responses. On the whole, the opportunities of the service were considered good, and most respondents thought that a driverless bus was a safe and positive experience. 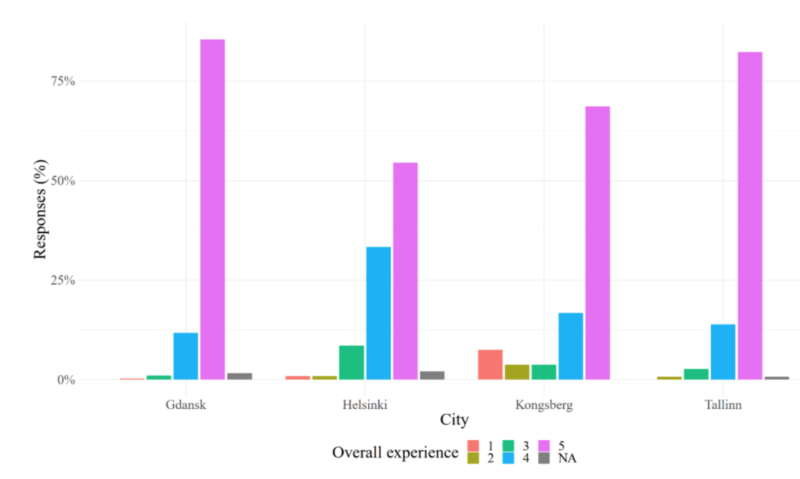 A summary of the pilot locations

Vuosaari residential area in Helsinki was one of the project’s pilot locations. The project enhanced Helsinki’s role as a trailblazer in smart transport and as a test platform for autonomous public transport, and introduced a large number of Helsinki’s residents to a new transport mode. Thanks to its advanced level, the pilot in Vuosaari was yet another step forward in the application of this technology. Vuosaari’s densely built urban environment and the route, which had a lot of other users and transport modes too, were significantly busier than the ones used in previous years’ pilots.

The project generated a large amount of information for the traffic planners in the City of Helsinki and the Helsinki Regional Transport Authority, allowing them to prepare well in advance for future changes and possibilities. The project illustrated the benefits that driverless technology can provide to the public transport services in Helsinki.

On the whole, the project promoted Helsinki’s smart transport strategy and environmental goals.

A simulation of how driverless technology can expand the area of good public transport services. 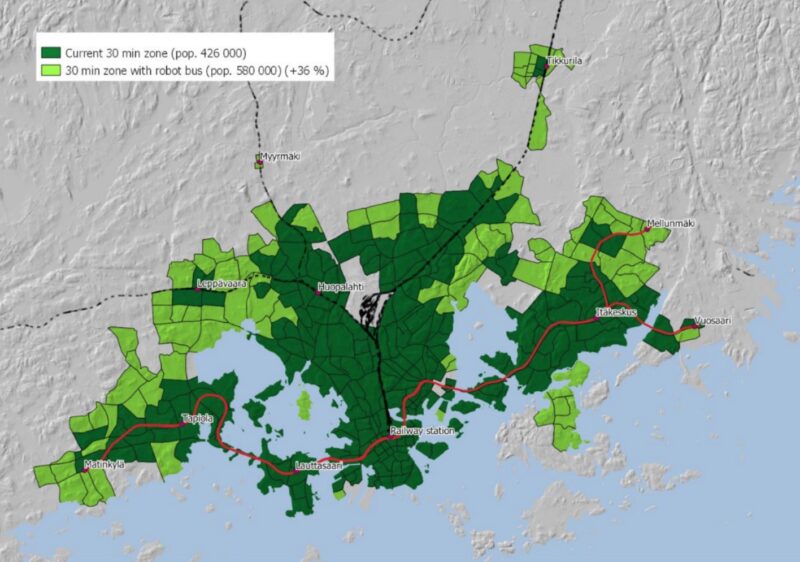 The simulation shows how the current public transport services can be improved with driverless minibuses, if the minibuses’ travel speed is 20 km/h and they run every 10 minutes. The service level in the dark green area is good, with an average travel time currently of less than 30 minutes. The light green area shows how far the good service level can be expanded with driverless minibuses. Source: Sohjoa Baltic User experience and impact on public transport

Energy minimization for an electric bus using a genetic algorithm

Expert-based multicriteria assessment of near-future scenarios for the automation of collective transport services in Helsinki – a SOHJOA Baltic Study.

The Future of Autonomous Transport in the Baltic Sea Region.