The Helsinki Region Infoshare web service already provides free access to over 1000 open data sets. In the future, it will contain even more public data from the municipalities of the Helsinki Metropolitan Area.

When the City of Helsinki Real Estate Department added historic aerial photos from several decades to the www.hri.fi service in summer 2013, geodata enthusiasts were thrilled. Over just a few days, coding-savvy citizens had built web apps, which made it possible to explore Helsinki’s development from during the war in 1943 to present day.

Besides geodata enthusiasts, the historic aerial photos interested others, too. When the citizens’ web apps were soon showcased on several newspapers’ websites, the general public was amazed.

This is what opening up data is all about. HRI maps out interesting data sets from the Helsinki Metropolitan Area and encourages city departments to give everyone free access to them online.

“We aim to make opening up data a regular activity for the municipalities of the Helsinki Metropolitan Area,” says Ville Meloni from Forum Virium Helsinki.

When the idea to open up municipal data in the Helsinki Metropolitan Area first came up in 2009, many saw it as no more than idealistic dabbling. Today it has become mainstream. The target is set in the government programme to open up public data sources, and other cities are getting establishing their own data catalogues. In the summer of 2013, HRI was awarded a 100 000 euro prize for public administration by the European Commission. In just a few years, the HRI service has made the Helsinki Metropolitan Area a pioneer in opening up public data. 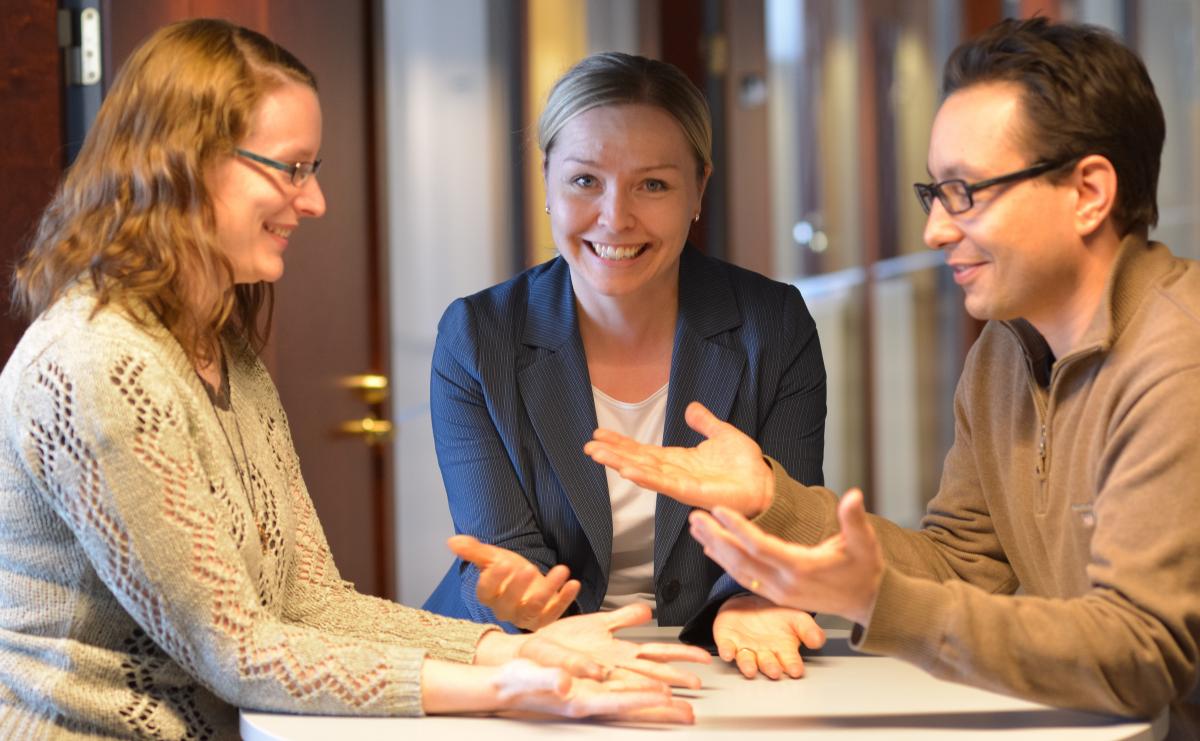 In 2010, Forum Virium Helsinki hired Ville Meloni as a project manager to launch the HRI project. From the start of 2014, HRI has been integrated as part of the regular operations of Helsinki, Vantaa, Espoo and Kauniainen, led by Tanja Lahti (centre) and Hami Kekkonen from City of Helsinki Urban Facts department.

Benefits to data owners, too

Opening up public data systems is also useful to the owners of that data. Helsinki Region Transport (HRT), responsible for local public transport, is already reaping the benefits of having done so. A few tens of thousands invested in an open API has given everyone access to public transport routes and timetables. Transport advice is now available not just through HRT’s own Journey Planner web service, but also dozens of mobile apps using HRT’s data interface.

Everyone wins in the open data operating model: public transport users get route information straight to their phones, HRT service is improved and the developers of the most popular mobile apps make money. “Had we started to develop the apps ourselves, we’d have easily spent 50 000 euro per app”, HRT project manager Jari Honkonen estimates.

Now HRI’s operation model, which proved successful in the Metropolitan region, is being copied around the country. Tampere, Oulu and Jyväskylä, for example, have opened up their data catalogues. The state administration has already published a nationwide open data service (avoindata.ﬁ), which utilizes HRI’s tried and tested technology.

HRI has been such a success story that Forum Virium Helsinki, who first got the project started, can already take a back seat. From the start of 2014, responsibility for the HRI data catalogue as well as supporting Helsinki, Espoo, Vantaa and Kauniainen officials in the data opening process was transferred to the City of Helsinki Urban Facts department.

The 100 000 euro EU prize speeds up the utilization of open data.

One of HRI’s achievements is the opening up of Helsinki City Group’s administrative data for everyone to use. The open interface Open Ahjo, which was unveiled in 2013, gives any resident the same access to public data as political decision makers or city officials. Only personal details are still restricted to officials. The interface, which started off as an idea at a Forum Virium Helsinki workshop, has become reality. The Helsinki City Group’s administration is now one of the most transparent decision making systems in the world.

Several easy-to-use web services are already exploiting the interface. It’s possible to browse municipal decisions on the map, peruse the attachments and blueprints of decision making documents, and explore the progress of the decision making process.

The 100 000 euro innovation prize from the EU is helping open data utilization gain even more momentum. Some of the prize money has been spent to finance the Datademo funding instrument. Coders have been able to apply for funds from Datademo for applications and visualizations that make use of HRI’s open data sources and promote a vibrant civil society.

The prize also made it possible to hire a new application developer to the HRI service.

“The cities of the Helsinki Metropolitan Area have been delightfully active in opening up their data systems, but the information is not yet interlinked,” Forum Virium Helsinki’s project manager Ville Meloni explains.

One of the new data specialist’s tasks will be to think about how decision making data from Helsinki’s Open Ahjo interface, for example, could work in tandem with the city’s various statistics, administrative areas, service points and financial data. 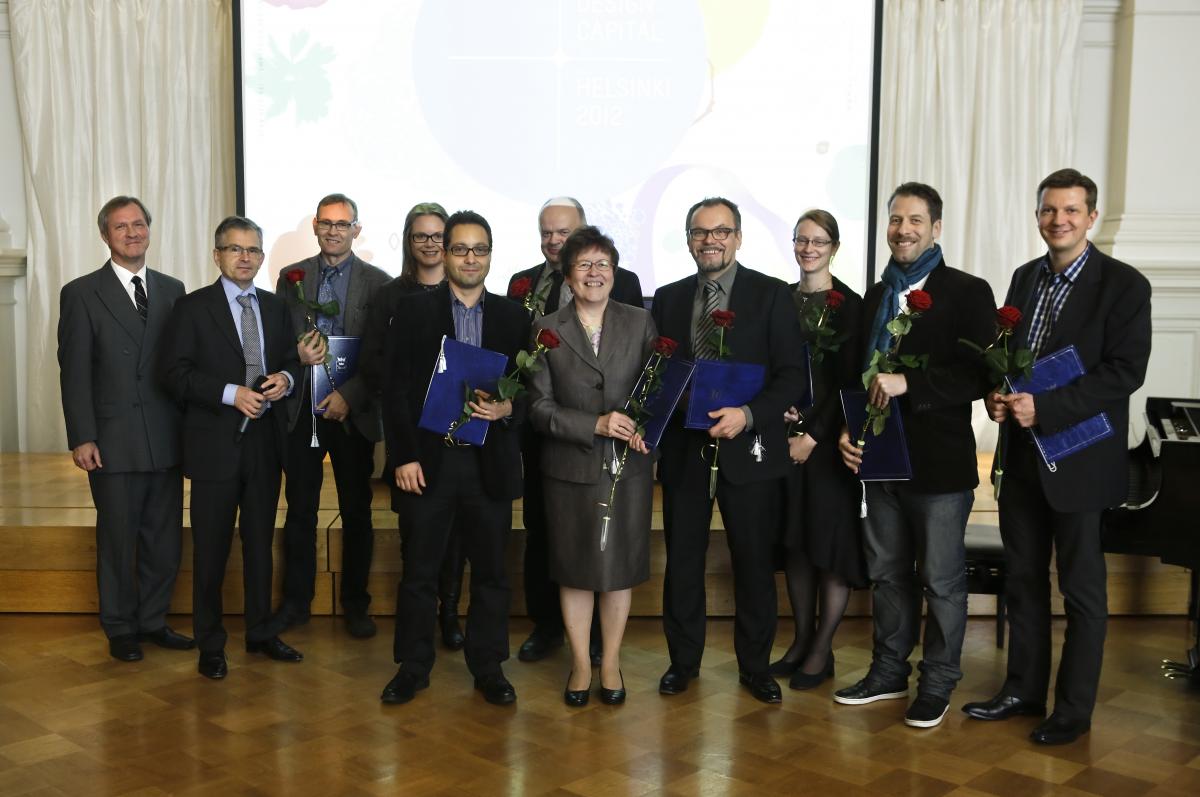 The Mayor of Helsinki Jussi Pajunen gave his Achievement of the Year award to the HRI service. “Congratulations. You are pioneers on a global scale,” Pajunen praised the HRI team from Forum Virium Helsinki and City of Helsinki Urban Facts department.

The Helsinki Region Infoshare web service already provides free access to over 1000 open data sets. In the future, it will contain even more public data from the municipalities of the Helsinki Metropolitan Area.