Planned to operate until the end of 2020, the distribution centre will collect lessons learned about the bicycle delivery of parcels in particular for European-wide utilisation. The pilot is being carried out with EU funding.

A new kind of local distribution centre for parcels, jointly operated by six different operators, is being opened next to Helsinki’s busy Baana pedestrian and bicycle corridor on 9 June 2020. For the rest of the year, instead of every delivery company driving into the congested city centre with their own vehicles, companies can bring their parcels to the shared distribution centre, where their delivery will be coordinated in a resource-efficient manner utilising low-emission modes of transport, such electric bikes.

The aim of this collaboration is to develop zero-emission bicycle distribution for parcels ordered online, but it will also facilitate other trials for tackling logistical challenges in the densely populated city centre area. The project is also one of the ways in which the City of Helsinki is addressing the development of emissions in the city area as part of its efforts to become carbon neutral by 2035.

The pilot is part of an international, EU-funded collaboration coordinated by Europe’s largest applied research organisation, the Germany-based Fraunhofer-Gesellschaft. The project is funded by EIT Urban Mobility (the European Institute of Innovation & Technology).

Other project partners include the Israel Institute of Technology and the Polytechnic University of Catalonia, which will compile a report on the lessons learned in Helsinki for more widespread international utilisation. The plan was to establish a second, similar distribution centre in the smart city of Helmond in the Netherlands, but the pilot was postponed due to the coronavirus outbreak. As a result, the practical lessons will be collected in Helsinki.

The other operators involved in the Helsinki pilot besides Forum Virium are Neste, DB Schenker, Pakettipiste, A2B and Fiuge. The broad cooperation network makes it possible to tackle the generation of emissions right from the start of the distribution chain: in addition to electric cars and cargo bicycles, other solutions to be utilised include the use of biogas and renewable diesel.

In practice, the companies will organise deliveries in the city area collaboratively from the Baana local distribution centre. The majority of the deliveries will be made with electric bicycles, while larger parcels will be delivered by electric van. The distribution centre will also include a Pakettipiste parcel locker that anyone can use to pick up their online purchases.

“The most concrete change for commuters using Baana, for example, is that the corridor will now also be used by logistical cargo bikes. We believe that Baana can accommodate everyone without any problems and that the pilot will help Helsinki to profile itself more strongly as an enabler of good and uncomplicated urban living,” says Forum Virium Helsinki’s Managing Director Mika Malin.

The aim of the participating companies is to speed up the development of low-emission transport with the help of a shared ecosystem. On the other hand, the distribution centre’s central location also facilitates the development of services aimed at consumers.

“We believe that the parcel flow will be significant and provide a wealth of information on how these types of solutions could work in the future in Helsinki, elsewhere in Finland and internationally. The local distribution centre can also be adapted for pilots in the area of robot deliveries, for example, so I think we will be hearing a lot more about the centre yet,” Malin says.

The local distribution centre opened by Forum Virium can be found from 9 June to 31 December 2020 at the address Baana 4/Lapinlahdenkatu 16, Helsinki. 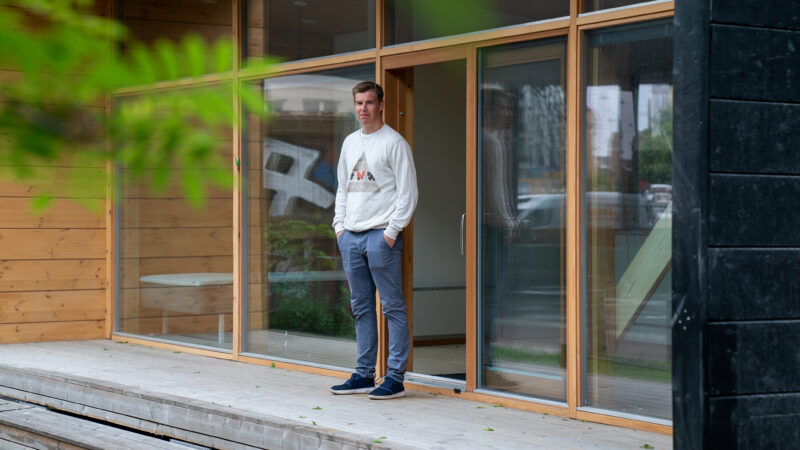